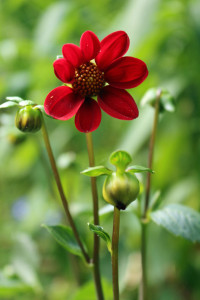 Summer Books
Summer’s hallmark lazy, hazy days and laid back schedules offer ample time to dig into a stack of books for some porch-rocking, hammock-swinging, beach-sitting, lake-floating, story-reading delight. This year, let nature provide inspiration for a summer reading list that showcases the original literary muse as the main character. We’ve picked out a few suggestions to set your mind a-bloom and grow your curiosity.

When a Pulitzer-prize winning biologist decides to write a coming-of-age novel, a modern-day classic emerges. Wilson displays the relentless struggle between man and nature through the heroic actions of boy fighting for the land he loves.

The subtitle — How The Largest Movement In The World Came Into Being and Why No One Saw It Coming — says it all to describe this thought-provoking work on the origins of modern initiatives for environmental awareness and social justice. Grassroots campaigns have successfully tapped into a collective consciousness with a magnificent ripple effect. Drop your pebble in the water…

The Language of Flowers by Vanessa Diffenbaugh

A talented florist, who survives a lonely childhood in foster-care, becomes fascinated by the Victorian tradition of using flowers to express specific sentiments. As she learns more about the beautiful messages conveyed in the blossoms, she weeds out the nettles from her own painful past.

Last Child in the Woods by Richard Louv

Establishing a strong connection with nature has always been a vital part of the human experience, yet our modern world increasingly parks us inside a technology bubble. Louv reports on the empirical need for children to enjoy regular exposure to the natural world and to enhance their education with significant time outdoors.

The Physick Book of Deliverance Dane by Katherine Howe

A Harvard doctorate student finds herself engrossed in the pages of an Puritan woman’s journal, then following a trail of healing herbs and ancient ayurvedic-style recipes that leads her right into the madness of the Salem Witch Trials.

The author that enraptured readers in The Girl with the Pearl Earring takes on the scientific discoveries of 19th century Britain and the classism creating a cultural “survival of the fittest”. Based on a true story of an uneducated British common woman whose fossil collections impressed the leading scientists of her time.

The Snow Leopard by Peter Matthiessen

Escape to Nepal on this journey of spiritual discovery as the author accompanies a field biologist on a research climb. The extended trek leads to an emotional quest for both of them.

The Signature of All Things by Elizabeth Gilbert

Born in the Age of Enlightenment and living through the Industrial Revolution, a botanist continues the research of her brilliant father even as her inherent need for questioning is challenged by her love affair with a captivating nature artist. Their relationship must weather the conflicts of Religion and Reason, Science and Spiritualism, Passion and Purpose.

The Thing with Feathers by Noah Strycker

From migration patterns to mating rituals, homing tendencies to nesting techniques, the distinctive behaviors of various bird species can teach us volumes about our own humanity. The truth about instinct and intelligence may be soaring right above us or perched on the limb of a favorite tree.

A Walk in the Woods by Bill Bryson

With a signature wit and precise execution Bryson puts a hysterical twist on the basic travel guide as he attempts an ambitious hike along Appalachian Trail. Lace up your boots and prepare to giggle. (Hint: Read it quick before the new feature film hits the big screen later this year.)