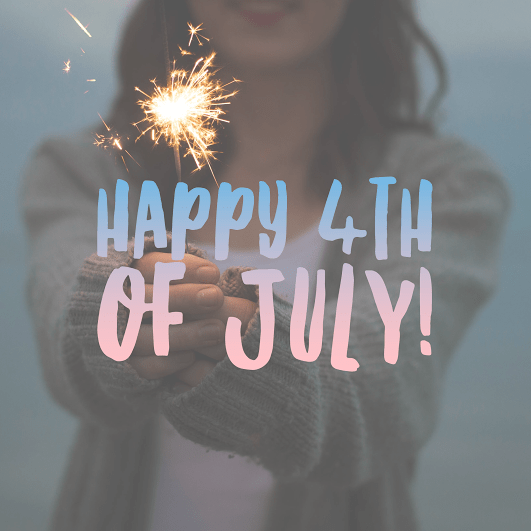 Happy 4th of July! Time to heat up the grill, break out the fireworks, and throw a giant birthday party for America. The 4th of July became a federal holiday in 1941, however the birthday celebrations date back to the Continental Congress adopting the Declaration of Independence from Great Britain on July 4th, 1776 (though the decision to declare independence was reached on July 2).

Before the Revolutionary War, annual celebrations were held in honor of the king’s birthday. Parades marched in the streets and speeches of gratitude were made. After the Declaration of Independence in 1776, colonists held mock funerals for the king. They set off cannons and also fired muskets. In 1777, the first anniversary celebration of the Declaration of Independence included a thirteen gun salute, red, white, and blue decorations, and fireworks. Much like our celebrations today!

Of the ten federal US holidays, the 4th of July is one of my favorites due to the fun and food. The excitement of summer mixed with an excuse to eat hotdogs all day (did you know Americans eat over 150 million hotdogs on the 4th!?). Furthermore, a giant outdoor party of fireworks in the name of freedom. So put on your red, white, and blue, head to your favorite fireworks viewing spot. Also put on your Citrus Spray insect repellent (we want you to have a pest-free holiday), and enjoy the party.